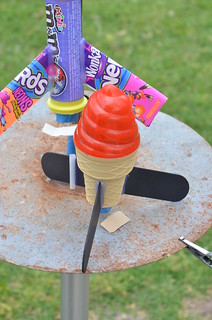 The last Rocketfest for 2013 was on the weekend of November 10th - as seems to be typical for these days we were met with poor weather, but a good turn-out and lots of crazy rockets!

The theme of the launch was Candy rockets - not powered by Mars Bars, but built from the packaging that keeps sugary sweets fresh in the shops.

Ross had a fantastically tall rocket made from Mentos tubes and Toblerone boxes and also flew his signature flying-fox rocket.

Other rockets included Karl's big purple thing (which ended up in a tree) and my M&M's rocket and Ice Cream Cone rocket (not a real cone - a plastic one that had lollies in it!)

Check out the full album on Flickr including both Photos and videos!